South African Women in Dialogue honours the life and legacy of struggle stalwart Mrs. Zondeni Veronica Sobukwe, widow of Pan Africanist Congress (PAC) Founder Robert Sobukwe, who died at her home in Graaf Reinet at the age of 91, forty years after the death of her beloved husband.

She was affectionately known as the “mother of Azania”, and the personal sacrifices she made as an anti-apartheid activist, as well as the “pain, rejection and immense suffering” she endured at the hands of the apartheid regime tragically but aptly personified the PAC motto of “serve, suffer and sacrifice”.

Mrs. Sobukwe, who was awarded the National Order of Luthuli in Silver earlier this year for her contributions to the anti-apartheid struggle, was born to farming parents Kate Mathe and Stini Mathe in Vryheid, KwaZulu-Natal, and she was an activist and a struggle icon against racism and injustice long before she met her celebrated husband, Robert Sobukwe, while she was protesting the racist conditions imposed on trainee Black nurses at Victoria Hospital in Alice, and he was the Students’ Representative Council president at the University of Fort Hare.

Although honoured for her warmth, humility and simplicity, she was also described as “one of the most defiant and fearless icons of the struggle” against racism, apartheid, and white supremacy in South Africa. As a trained nurse, she repeatedly questioned the prison diet fed to her husband, and would testify before the Truth and Reconciliation Commission that shredded glass had been mixed into his food.

SAWID honours her life, legacy and extraordinary contribution to Pan Africanist values, including the shared fight for the “return of land to the dispossessed African masses.” It would seem that the PAC objective for African people to own land will now finally be achieved, after 24 years of democracy.

We express condolences to her family, friends and the Pan-Africanist movement, and take note not only of the “courage, resilience and fortitude” that characterised her, but also of the Pan Africanist vision of “Ubuntu nomanyano lwe Afrika. That is, the full humanity and unity of all Africans.” Mama Sobukwe noted in a conversation with the Nelson Mandela Foundation that her husband Robert would often end a conversation with the comment, “Remember Africa,” and the Nelson Mandela Foundation, in collaboration with the Robert Sobukwe Trust, honoured him with a 2011 exhibition entitled Remember Africa.

Today we are reminded to Remember a Daughter of Africa, and the incredible personal sacrifices millions of South Africans had to make to demand humanity of their apartheid era oppressors. May her and her husband’s sacrifices and struggles be rewarded by the emergence of a humane and unified Africa, that will never again experience the injustices and oppression experienced under the apartheid regime they both so resisted. Young women can draw inspiration from the example of her life to resist inhumanity and indignity wherever they find it, and to pursue a world that favours the equal wellbeing of all.

Mrs Zondeni Veronica Sobukwe is survived by three children, seven grandchildren and a great-grandchild. Her burial will take place in Graaff-Reinet on Saturday, August 25, 2018.

in Gender Based Violence

in Gender Based Violence 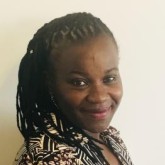